Just a few more odds and ends before we flip off the Undead Settlement for good. 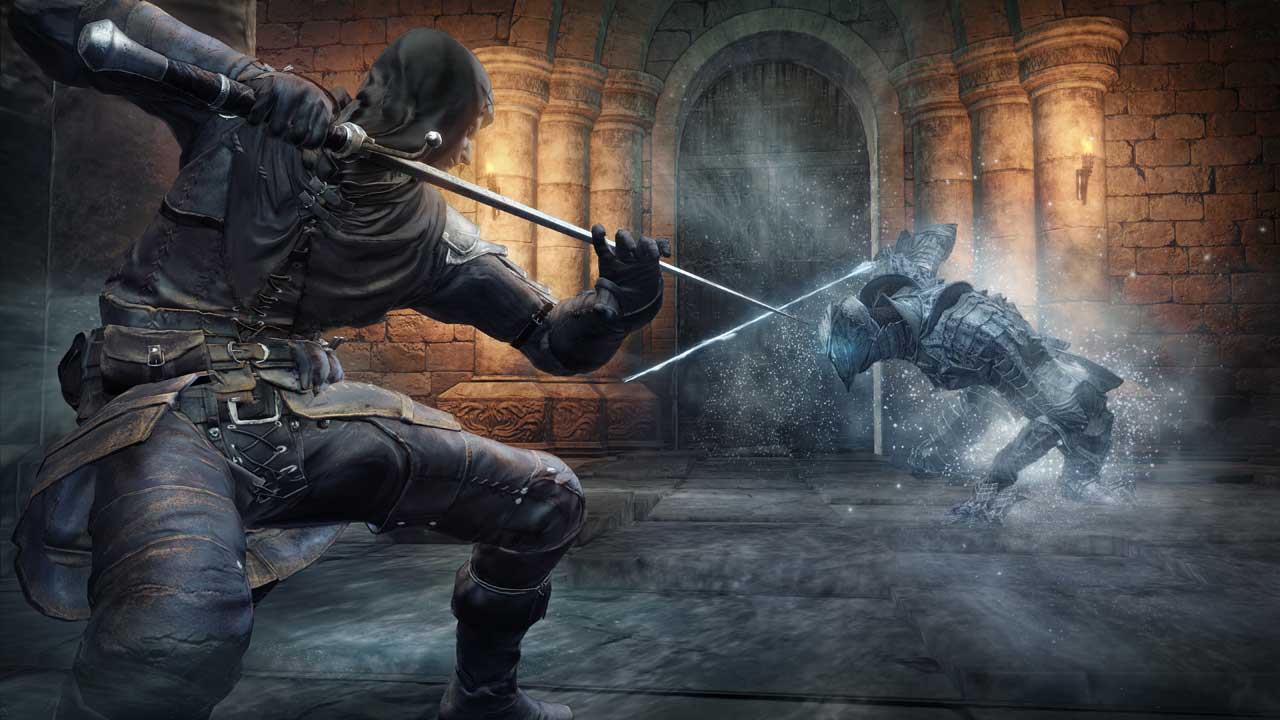 You are watching: how to get to road of sacrifices

We have a few boxes to tick before we get outta here. Hand the Mortician’s Ashes over to the Shrine Handmaiden vendor if you haven’t already, and then purchase the Grave Key for 1,500 souls. Travel to Dilapidated Bridge and enter the sewers, unlocking the door.

In the tunnels, turn right at the junction and collect the Loincloth. You can pray at the statue here if you’ve been invading and regret it. On the other fork, grab the Red-hilted Halberd from the corner when the room opens up, then plunge into the next tunnel.

The next room contains skeletons. Good news for series veterans: they’re not resistant to slash damage. They’re honestly nothing compared to other things you’ve dealt with so far; just vanilla melee, and you can even attack them while they’re assembling. There are four before you can safely collect the Soul of an Unknown Traveller, and one more as you move on to the next area.

The next skeleton won’t assemble till you walk past. Quickly turn and kill it when you hear the audio cue, then put your shield up to face a one-armed skeleton from further in the tunnel. This variant can fly at you swinging its sword like a helicopter rotor, which is less than ideal.

There are no more nasty surprises so continue on until you can see an open area ahead. Peek out to the right; there’s a grunt and a Crystal Lizard. Lure the grunt to you with a ranged attack so you can safely make a rush on the lizard and collect the Heavy Gem it carries. You can grab a couple of Titanite Shards at the far end of this canyon, but you need to watch out for the woodsman who drops down from above when you approach this area.

Head through the tunnel opposite where you entered this ravine and shoot down the corpse above to collect a Blessed Red and White Shield +1. The door to the next room is right by where it falls. There’s one rat waiting for you in the dark, but six more rats swarm in as you cross the room. You may want to sprint back to the ladder – or across to the next one – so you can attack them from safety.

Up the opposite ladder you’ll find Irina of Carim. Speak to her, agree to touch her, then speak to her again to receive the Prayer emote. Accept her service to transport her to Firelink Shrine; she sells miracles (faith spells).

Open the locked door and speak to Eygon. He is available to summon in battles and will remain friendly as long as Irina is alive.

Return to either Dilapidated bridge or Cliff Underside and make your way back to the church with the elevator. Take it down (you may need send it up first, so you can climb on the lower platform) to the basement.

Be very cautious approaching the second room. The beast-like knight inside is called an Outrider, and it’s very dangerous – a bit like a miniature Vordt. Anything you’ve got to resist frost is a help, and fire attacks are a bonus.

If you’re not up to this daunting task, cheese it. Without entering the room carefully stick an arrow in the Outrider’s head, then retreat. When you return to the door a few moments later, it’ll be pacing somewhere in the room. You can usually find a clear shot on it between the columns if you time it right. Run all the way back to the lift between shots, and take it upwards if the outrider advances into the previous room (it usually won’t but better safe than sorry). At low health it gets more aggressive in investigating, and may also return to its initial position and hold still, so adjust your aim to match.

Update: commenter fn noobee suggests using the lift to kill the Outrider; lure it close to the lift and travel upwards, so the Outrider falls in the shaft as it tried to get to you or wanders back to its room. It may take a few tries. It’s similar to the Darkwraith cheese described below.

When the outrider goes down you’ll receive the Irithyll Straight Sword, which is a handy frost weapon. The item in the middle of the room is an Ember. More excitingly, open the doors and activate the Road of Sacrifices bonfire.

Before we move on: if you killed the Demon with Siegward and collected a Pale Tongue (or otherwise obtained one), you may want to return to Firelink to speak to Leonhard to receive the Lift Chamber Key. Take this to the locked door in the basement under the Tower on the Wall bonfire in High Wall of Lothric to battle a Darkwraith – that is, a player-like enemy.

This guy is a nightmare for non-melee characters, but – and we’re also very sorry about this – he’s very easy to cheese. Get up in his face, then run back to the lift and ride it upwards. The Darkwraith will fall down the shaft and die. Job done. If it doesn’t work, try it again a few times after resetting at the bonfire.

However you kill him, your reward is the Red Eye Orb. Return to Leonhard at Firelink Shrine and speak to him to receive the Applause emote – and an invite to join another covenant, which you can cash in later.

Continue via Road of Sacrifices to Halfway Fortress.

Back to Dark Souls 3 guide and walkthrough.