GolfWRX was invited to test drive Ping’s i20 irons in late 2011, and after hitting them I told the design team they had a decided winner here.

You are watching: ping i 20 irons reviews

An iron that will compete with the best cavity-backs in the game in design, feel, and performance.

Tour proven these heads are packed with as much technology engineers can add to an iron that still looks like a players type package.

An iron to compete with the last set of irons I had purchased & bagged — the 2008 AP2s.

In fact, I was naively wondering if Ping was going to have the production capacity to meet the increased demand I was sure would meet Ping upon the release of the i20 irons ( of course they do. )

It kept rolling through my head, though: you guys will need extra shifts to meet demand … have to take on more help … might have to re-open a closed factory …

Such was my resolve after our initial testing.

Now it’s time to do some real world testing of the i20 irons — on my courses, in all conditions, with production samples. I’ve always found the proof is in bagging a set of irons and getting 15-20 rounds in with them to see how they perform over time with good & bad swig days, on multiple types of courses. Too often in the past I’ve had an intense honeymoon phase with irons that quickly, disappointingly wanes into indifference after a few weeks. Perhaps it just takes me a little longer to get to the heart of the matter. Perhaps I need to dot all the “i”s and cross all the “t”s. Lets call it thorough. Consider this my first installment in a rolling Editor Review of Ping’s new i20 irons ….. I hope it doesn’t rain tomorrow. Posted Image 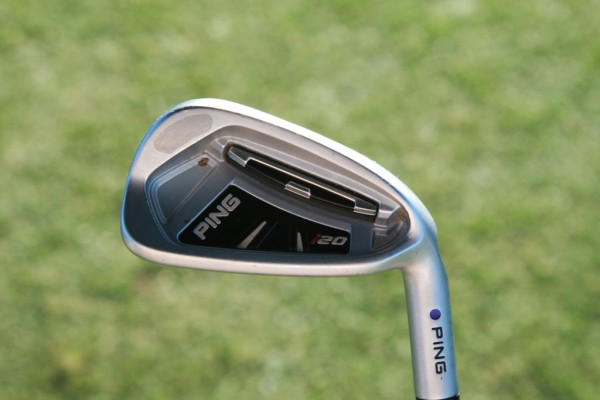 A high-density tungsten toe weight provides forgiveness across the face for accurate results and a high-launch, low-spin trajectory.

And so it begins…

The i20s arrive with cute little protective socks on each one ( that are actually quite functional ), and a pink tag letting me know a real person built my irons and checked the specs to ensure they matched my requirements. Kind of like my own personal Ping elf. 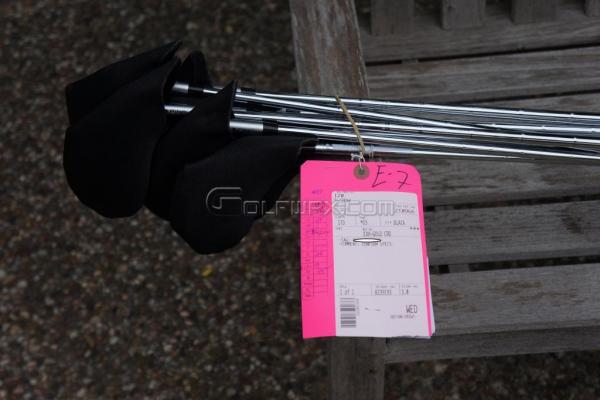 Sky blue day today with highs around 50 gave me my first chance to hit the new i20s. I head over to Memorial Park Golf Course because it’s close.

I warm up with wedges and get to it. Off the bat I notice the head weight a bit more than usual. Coming from 130 gram Dynamic Golds to these 109 gram CFS shafts, I’m dropping a decent chunk of cut shaft weight. Now I ordered my i20s to swingweight at my usual D3, which may be a point or two too high if trying to match the feel of a D3 with DGX100s.

So I’d recommend you consider this, and maybe drop your swingweight spec. by a point or two, if you’re trying to match in the hand feel. Word to the wise. Does it make a big difference to me? No. We’re only talking 2/3 nickels worth of weight here. 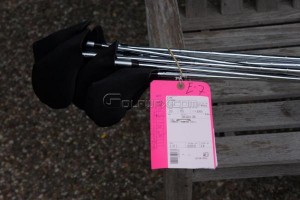 So I’m hitting off the mats — Memo only has mats — and I’m liking the i20s fine. Feel/sound is as remembered. Loving them? Nope. Why? They’re new irons to me, with new shafts. They feel different than what I’m used to. Of course they do, they’re supposed to because they are different. Plus, I’m hitting off mats. 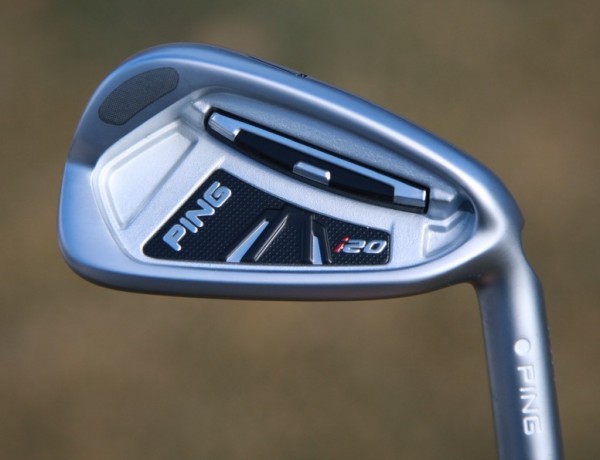 Stabilizing bars and a thicker face ensure distance control and a solid feel. A ferrule offers a clean, high-performance look.

Range mats are no place to judge iron performance, imo. Mats don’t allow an iron to do what it does naturally, which is deflect down into the ground off impact. You don’t get the “down” part. And mats hurt over time. I know personally that I subconsciously alter my swing if/when I have a long irons session on a mat. My attack gets shallower — helps minimize the impact of beating a rod with a metal object on the end of it into an unforgiving surface repeatedly. 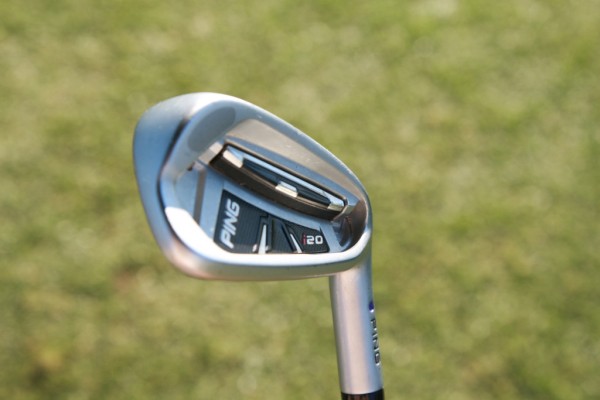 But this is the thing with new irons. For many of us they’re not going to be perfect out of the box. You have unfamiliar clubs in your hands. It takes time to adjust to the differences of your new dance partner. For some it’s just not an issue. For me, it takes a handful of range sessions and a handful of rounds to stop being conscious of my new “different feeling” irons and just point & shoot. Too many times I see guys with new irons one week that they traded in for something different a month later: “Ahh, they just didn’t suit me,” … “Liked them in the store, but awful on the course,” … “Couldn’t hit a fade/draw/high/low/stinger/knuckler with ’em.” Well give it more than a couple of weeks, for crying out loud. 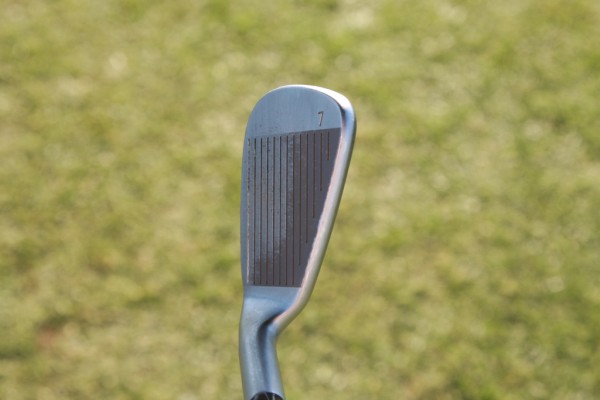 Even though I’m purposefully down at the end of the range, a few folks around me are ohh’ing and ahh’ing about the i20s. I let a number of guys try them, then I go through my usual routine with new irons. I hit 10 or so balls with each iron, PW up to the 3-iron. They all get to get dirty. Posted Image I try not to judge much other than feel … I’ll consider the rest further down the road. ( By the way, feel is very good with these. ) 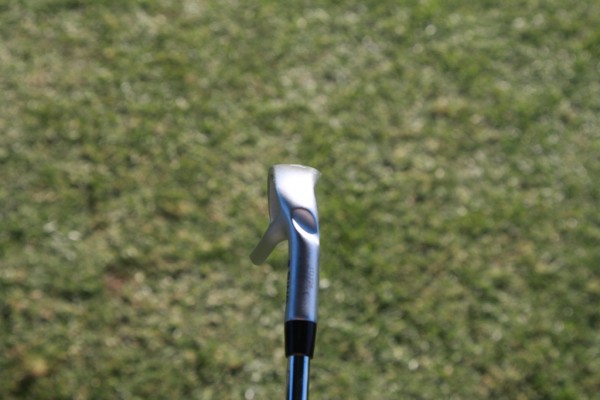 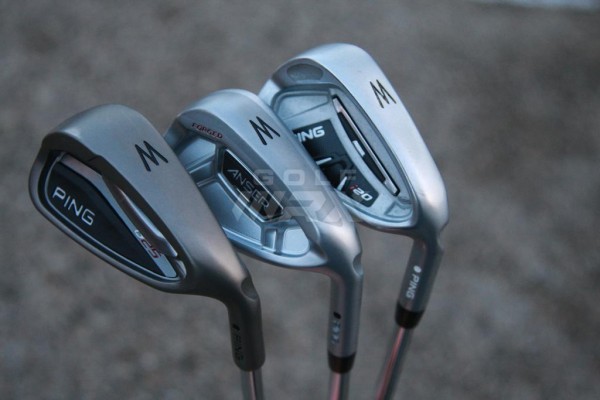 From left to right… Ping G25, Anser Forged and Ping i20

One thing I’ve learned over the years trying/testing/reviewing irons is you just have to wait a while before making up your mind. Or as Diana Ross And The Supremes said, You Can’t Hurry Love.

Click here to go to the original thread in the forums

Pros: Feel, feel and feel. Performance and looks are awesome to

Cons: You can see the back of the sole from address on the 3 and 4 iron

Bottom Line: This is a hit from Ping! At first glance, the i20 irons are an obvious departure from the i-lines of the past. The most obvious of these changes are the use of the vertical custom tuning port (CTP) and stabilization bars in the cavity; carryovers from PING’s S56s.

Just a few short days after PING announced the G20 irons, interest immediately shifted over to what the i20s might hold. With nothing more than a low-quality TiVo’d screen capture of a wedge on a desk and lots of hearsay, WRXers speculated on what PING had up their sleeves. Last month PING had a few of us come down to put the rumors to rest and let us know exactly what we had to look forward to. And I gotta tell you, the buzz was warranted. Now, because of the interest generated on this site, PING is letting GolfWRX showcase the i20 lineup!

At first glance, the i20 irons are an obvious departure from the i-lines of the past. The most obvious of these changes are the use of the vertical custom tuning port (CTP) and stabilization bars in the cavity; carryovers from PING’s S56s. The stabilization bars help improve feel along with a thicker face in the impact area, while the vertical CTP construction allows for a lower center of gravity and different options for weight positioning.

Another key feature to the design of the i20s is PING’s blended set concept. As was the case with the i15s, the i20s are noticeably longer heel to toe in the long irons, gradually decreasing in size to the wedges. This time around, PING made the top rail thicker in the long irons transitioning toward a thinner topline in the wedges, dramatically increasing the MOI where golfers need it most.

Great discussion thread in the forums about the Ping i20 irons

Along with the tungsten weighting in the toe, these three features increase the MOI across the horizontal axis by about 3% throughout the set, and between 4% (PW) and 12% (3iron) more vertical axis forgiveness over the i15 irons. Given the greater headweight and smaller size that irons have compared to drivers, that increase is substantial. Basically, the i20 irons provide golfers a pitching wedge that has almost the same workability as the S56s with a 3 iron that’s even easier to hit than the i15 counterpart.

New to the i20s is the variable cavity pull construction. Here, PING moved the center of gravity down and toward the front in the wedges to give players a more piercing trajectory, progressively pulling the COG back to elevate ball flight in the long irons. This feature makes the clubs more user friendly while maintaining workable distance control throughout the set, prioritizing accuracy in the short irons and forgiveness in the long irons.

The last key design change in the latest i-iron, is the decreased moment of inertia around the shaft axis. In keeping with the varying nature of the blended set design and the cavity pull construction, PING decreased the axis MOI in the i20s by 14% in the 3 iron and 22% in the pitching wedge over the i15 irons (with the middling 7 iron coming in with a 20% decrease). This makes it easier for golfers to manipulate the club through rotation, working the ball left or right as needed, while not losing forgiveness off mishits.

To accommodate all these new features, the differences in how they’ll cause the ball to react, and the adjustments that golfers may make, PING adjusted the sole design so that turf interaction wouldn’t detract from the clubs’ utility. Changes include more material in the heel to decrease digging, more bounce, a slightly blunted leading edge, and a little trailing edge relief. These changes were needed because when the lower the center of gravity is placed, the more the clubhead wants to deflect down into the ground when impacting the ball (which is why you don’t take divots on practice swings).

In standard PING fashion, the i20 irons will be available both lefty and righty in 3-9, PW, UW, SW, and LW configurations. The standard shaft offering will be PING’s proprietary CFS shaft.

For those new to this shaft, it’s based on the ZZ65, but has been expanded from the original hard stiff flex. One of the characteristics that made the ZZ65 unique was the thicker tip section, which reduced tip action at impact and flutter immediately after. In the Stiff flexed CFS, PING extended the tip by an inch to bring the stiffness to the current industry standard. Short irons get slightly less tip reinforcement to help with feel. The X-flex CFS shafts have a tip that is 1″ shorter and 5 grams heavier, while Regular and Soft Regular CFS shafts have no tip reinforcement to help activate the tip.

I am REALLY looking forward to these irons. My impressions were…very favorable.

Great discussion thread in the forums about the Ping i20 irons 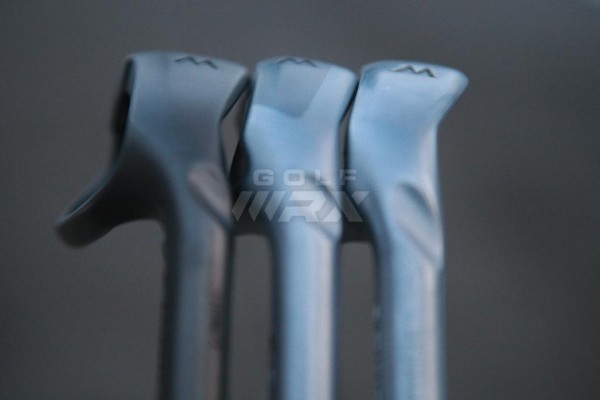