Pros: At address, SpeedBlades are an absolute confidence booster with a thin(ish) top line. They have a great trampoline-like feel when flushed, and mishits won’t punish your joints. The ball flight with the long irons can look down right majestic.

Cons: Trendy-ish design. The long irons are a bit clumsy for working the ball, and the generous amount of offset is a touch worrisome for any golfer that is potentially considering “regressing” towards the game improvement family from a player’s stick.

Speedblades are a cavity-back, cast iron with a moderate amount of offset and a brushed finish. The size and shape looks appealing and doesn’t look as forgiving as we now know they are.

More importantly than the finish these irons feature a newly engineered speed pocket, a handle-bar shaped slot in the sole of the 3-7 irons that enables a large area of the face to flex and rebound at impact, resulting in faster ball speed, higher launch and better feel.

TMag’s research indicated that 72% of shots by 5- to 25-handicappers are impacted below the center of the face, which typically results in low-launching shots of inconsistent distance. 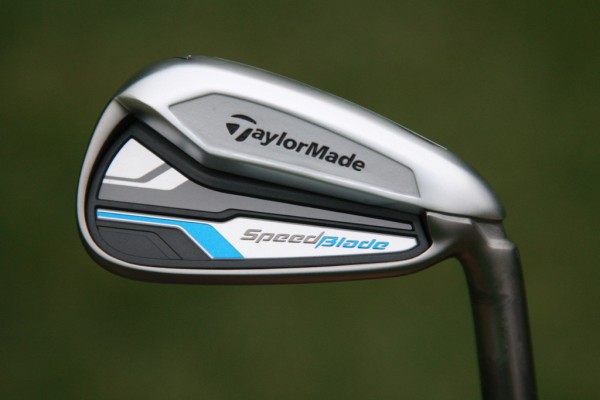 They build on the technology of Taylormade’s RocketBladez irons, which were the first of the company’s irons to have a “Speed Pocket.” 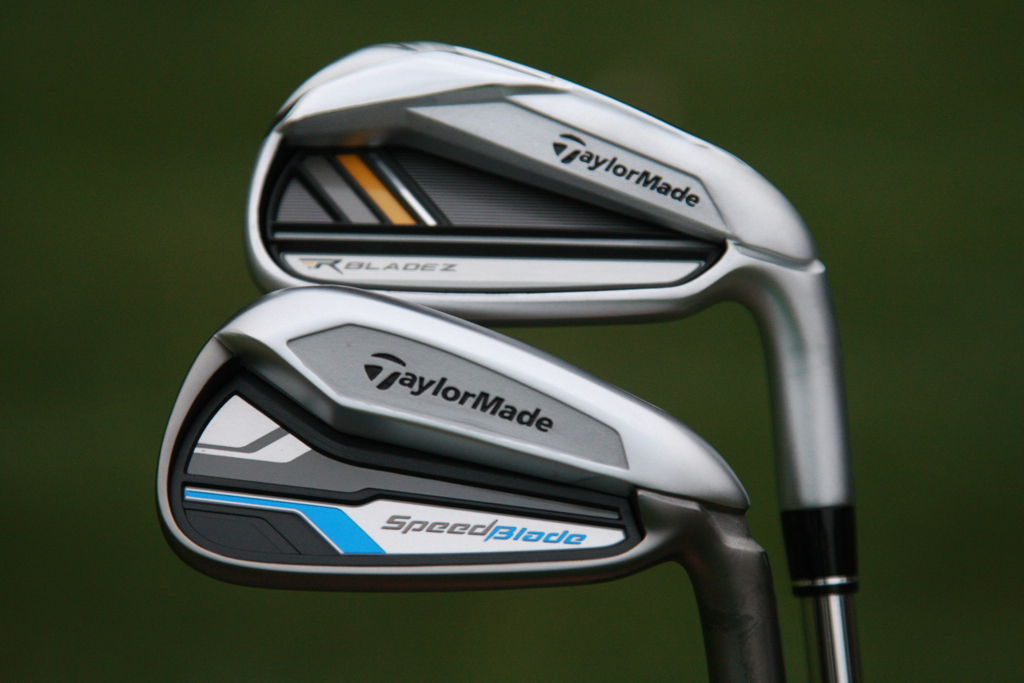 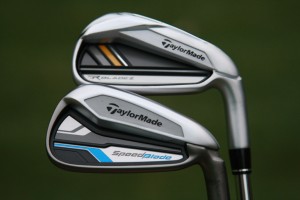 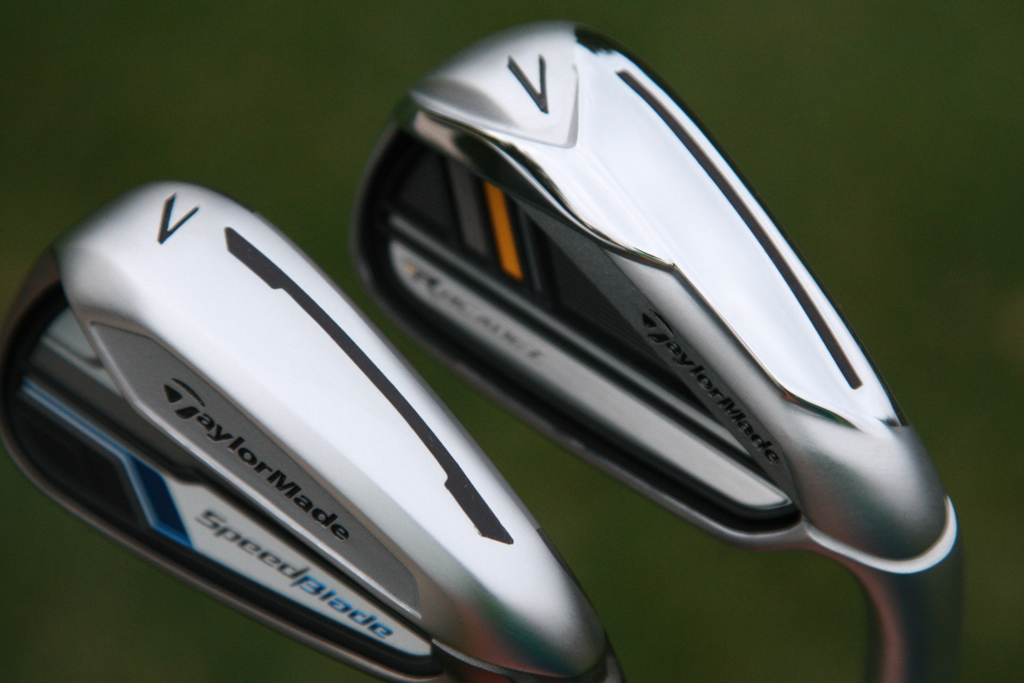 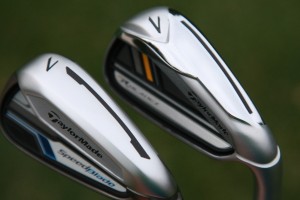 Above: The new SpeedBlade (Left) and the older RocketBladez (Right).

Click here to read more about the technology in the SpeedBlade irons.

TaylorMade touts its latest Speed Pocket as “a deep slot behind the clubface that allows the face to flex and rebound faster, increasing your ball speed and launch angle to boost your distance dramatically.” This club purportedly differs from the RocketBladez irons in that TaylorMade has “lowered the [Speedblade’s] CG to further increase your launch angle. Shots scream high into the sky and stay there longer, equaling longer carry and more distance.” Hey, I’m all for it if it works. 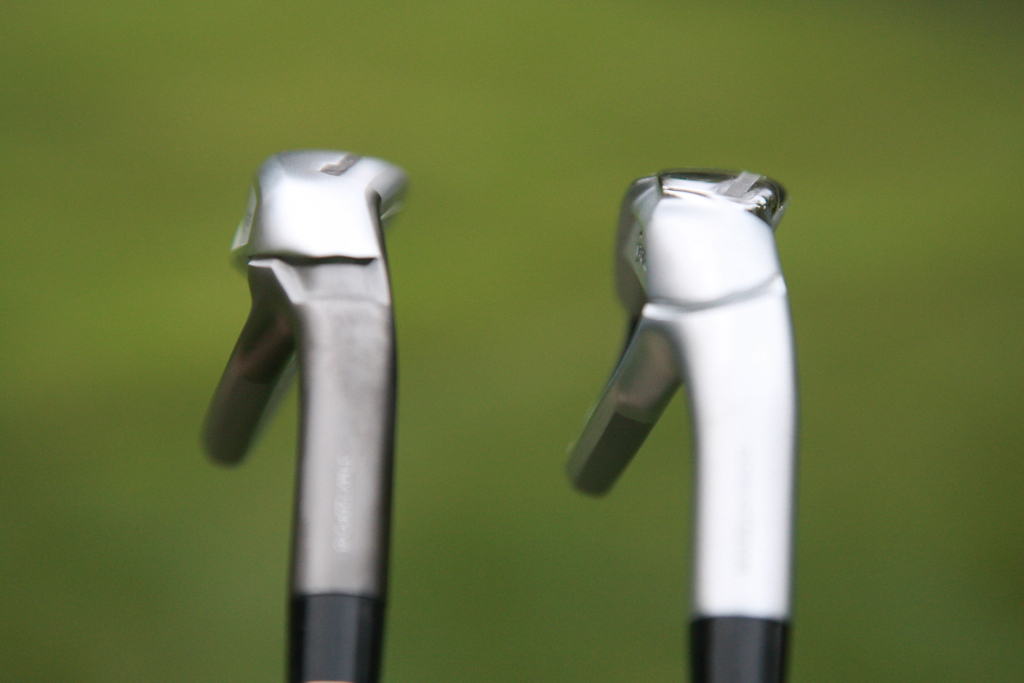 Above: The handlebar-shaped Speed Pocket of the SpeedBlade irons is longer and wider than the RocketBladez irons. 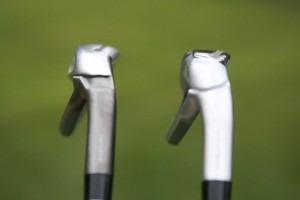 TaylorMade’s branding posture is not a subtle one. I still snicker recalling the excessively brash “IER” campaign from early 2013 to promote the RocketBladez (“I. PLAY. A DISTANCE IRON.” said a scowling Justin Rose). The Speedblade’s advertising has a similar bravado: “The Speed Pocket makes all other irons inferior. It’s nothing personal. It’s innovation” according to the TaylorMade Website. Well, TaylorMade, insulting my beloved (and aesthetically superior) AP2’s I DO take personally, so pipe down a bit, ok? Let me hit them on my own and decide for myself. 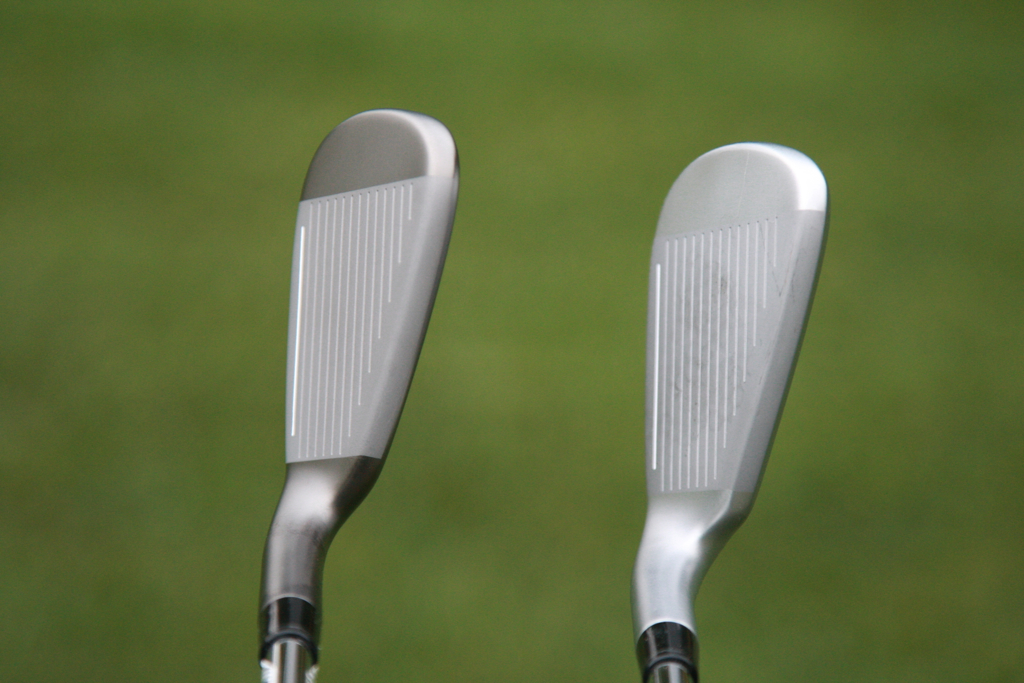 But I must say, the performance of the SpeedBlades is eyebrow raising here, in a good way. Long and mid irons explode off the club face and reach soaring, green-holding heights. In a few instances, well-struck shots appear to fly past my target. Short irons, while still forgiving and powerful, are also precise. It’s an impressive display of ball striking all around. I’m reminded of that scene from Demolition Man where Wesley Snipes’ character (Simon Phoenix) finds the futuristic ray gun in the museum, fires it and is immediately dazzled. 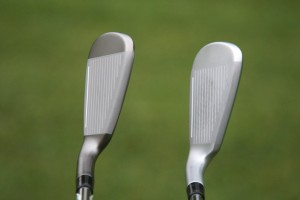 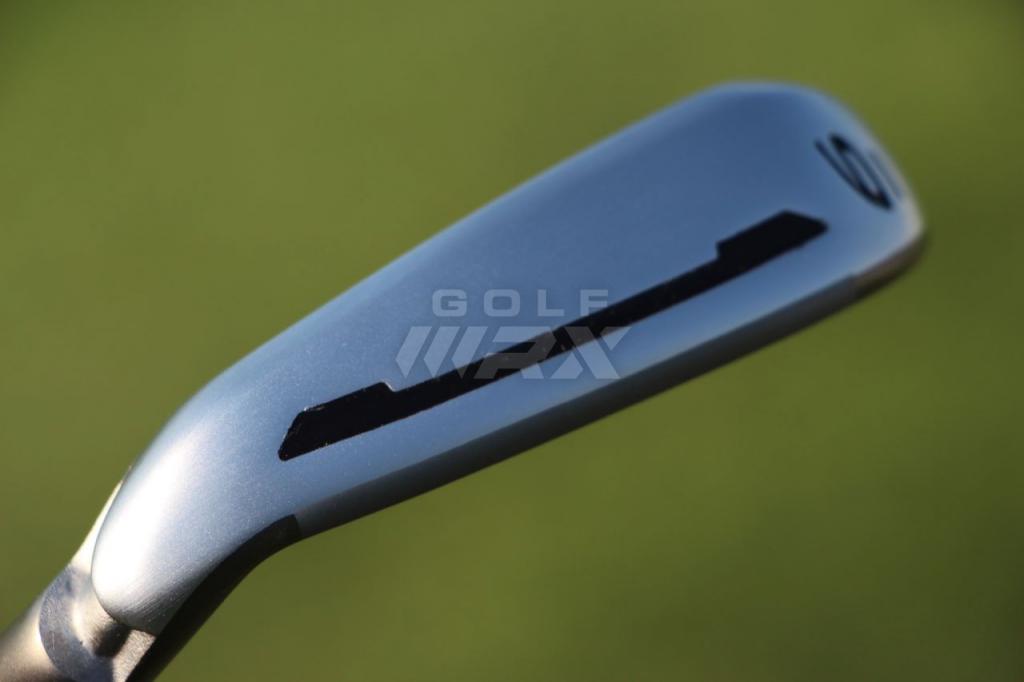 Off-center hits are quite playable. I spent a couple of hours hitting these on a brisk New Jersey fall evening and mishits didn’t die miles short of my target. I was surprised at how balls that were struck outside the sweet spot ended up achieving a respectable ball flight. 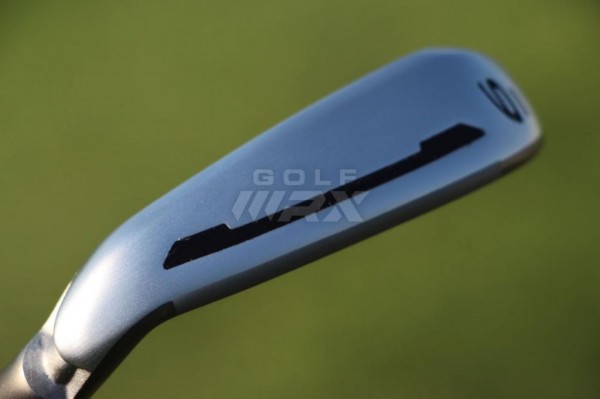 Above: The SpeedBlade “A Wedge” (50-degrees) and is noticeably more compact than the longer irons.

It is worth mentioning the SpeedBlade A Wedge (a gap wedge), Sand Wedge and Lob Wedge, which are not cavity backs like the rest of the set, and have more of a blade appearance. They are impressive tools; very accurate and crisp at impact.

One minor gripe: Working the ball with long irons was a bit challenging because of the clubhead size and offset, which does indeed lessen as the set progresses. Nonetheless, TaylorMade’s general assertion that your “shots scream high into the sky and stay there longer, equaling longer carry and more distance” was true for me. 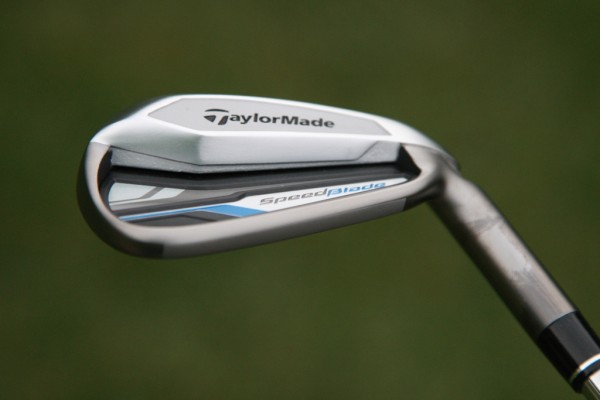 I wouldn’t say the SpeedBlades are necessarily beautiful, but there is a handsome, albeit a bit hunky presence about them (perhaps a bit more Mustang than Maserati). The top lines are thinnish for a game-improvement club, and the brushed steel looks soft, receptive and ready to compress the ball. The finish also serves to negate glare. If placed in your golf the bag, the blue font/decal on the back of the club adds some “pop” without being (too) tacky.

The feel of the SpeedBlade irons is more muted than the RocketBladez, which will be a big selling point for them. As stated above, there is a springy, energetic response on flushed shots; it’s almost marvelously violent on occasion. Perhaps it is the slot technology at work, but it is at times an addictive, pulse-pounding sensation that leaves me periodically giggling and feverishly positioning more range balls to be thoroughly pulverized.

Again, I wish to praise the merits of the wedges here; a “player’s” looking club with a soft, yet crisp feeling at impact with a downright precise look at address. With a nice click, these club send the ball exactly to your intended target.

Nonetheless, this is a cast set of irons. The sensation experienced on flushed shots never quite approaches euphoric levels of sensory ecstasy that one could can encounter with a finely crafted forged club. It’s just a touch less solid. 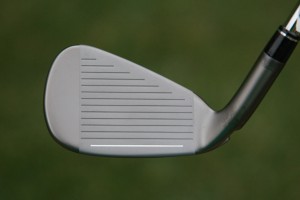 Above: A SpeedBlade 6 iron at address

Feedback on mishits is also a bit numb at times, but I suspect that could be a goal and not a defect. The more than moderate amount of offset is also not going to be for everyone, although it’s essentially non existent in the shorter irons. 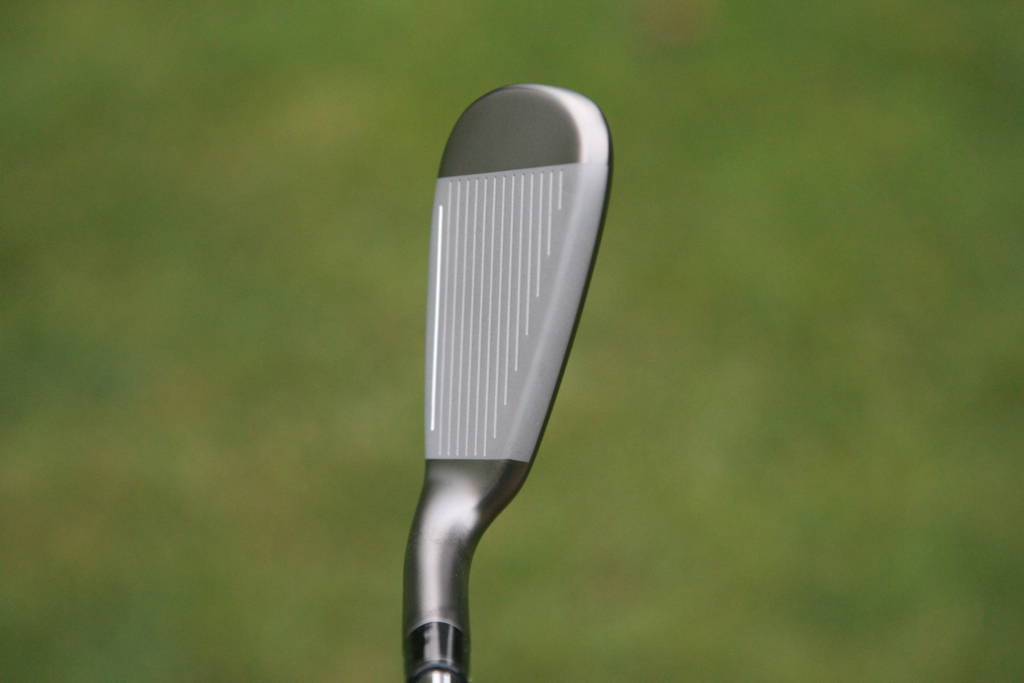 One word definitely comes to mind here: long. These SpeedBlades send the ball a long way, particularly with the lower lofted irons that, let’s face it, are the clubs most golfers struggle with and the reason hybrids were invented.

I’m also a fan of the “toned down” design in the Speedblade vs the Rocketbladez, whose loud appearance and color scheme was a bit “much” for me in the looks department. The Speedblade has a more tasteful, pleasing presence. You could be proud to slip these into your bag. 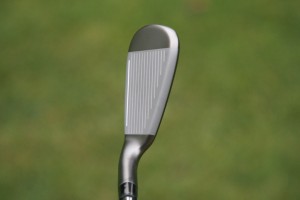 The short irons are also “player-like” enough to create curiosity from better golfers, who might like more forgiveness in their long irons, but also the smaller size and additional feel and precision from of their shorter irons. They would not be disappointed here. 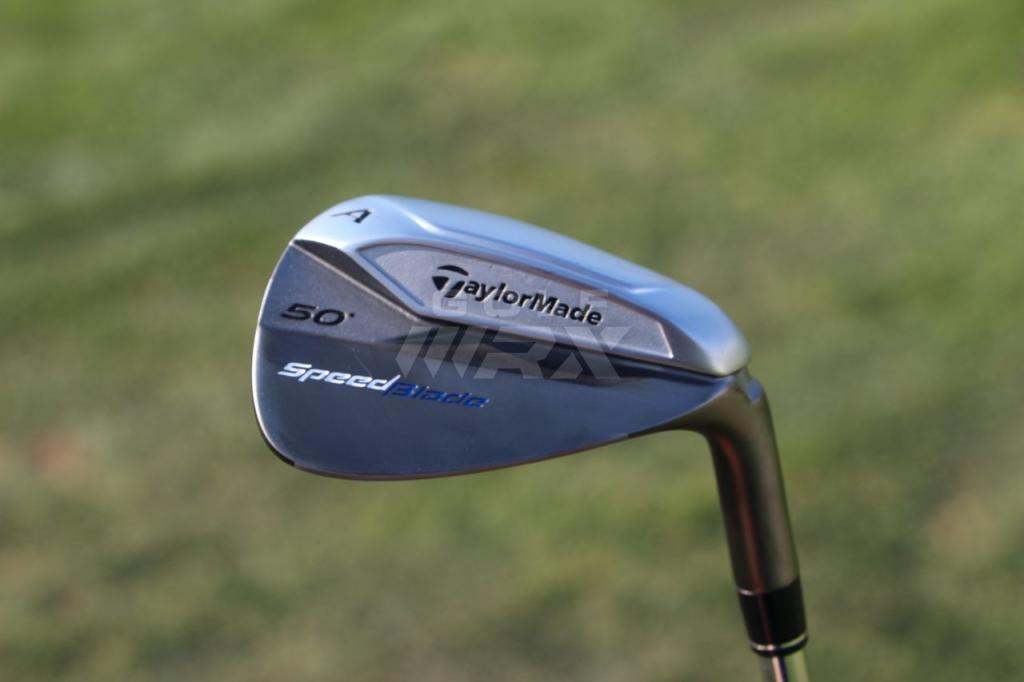