Pros: Two different options, a Pro version with a slightly smaller head and lower launch and spin, and a standard version with more forgiveness and an easier launch. The forged Hyper Speed Face Cup produces a smooth feel and more ball speed across the face.

Cons: The look of the Pro version turns heads, but even the better player might find it takes more “work” to hit great shots.

Bottom line: Both hybrids live up to the marketing promise of higher ball speeds and more distance even on shots not hit on the sweet spot. The X2 Hot Pro is geared for the better player and creates lower-launching, more-penetrating flight and the ability to easily work the ball in any direction. On the other hand, all golfers, even better players, should seriously consider the X2 Hot Hybrid and its slightly larger, more-forgiving face and higher-launching ball flight.

Callaway continues to launch new products that offer golfers two different versions to chose from — a Pro version for better players and a standard version designed for everyone — allowing golfers of every skill level an off-the-rack choice of clubs suited to their general needs. The X2 Hot Pro hybrid, with its smaller, tour-inspired head and Aldila Tour Green shaft, is designed for the better player looking for a lower-launching, lower-spinning hybrid. The X2 Hot hybrid, designed for every golfer, has a larger face, larger sweet spot and Aldila Tour Blue shaft that makes it easier to launch the ball in the air and generate distance even on mishits. 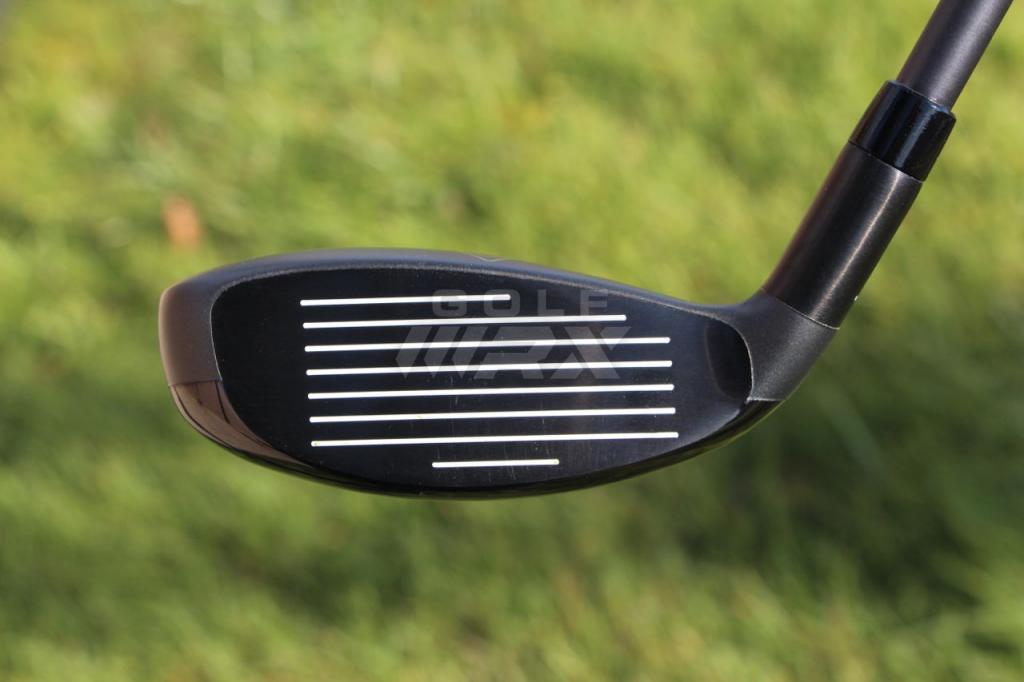 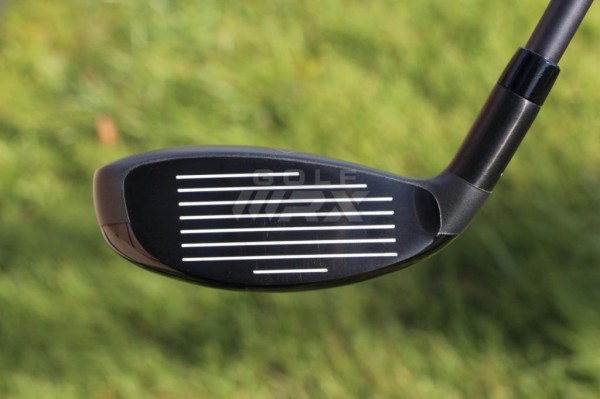 The Callaway X2 Hot Hybrid (above) and X2 Hot Pro hybrids have similar-looking club faces, but the body of the X2 Hot Pro is substantially slimmer.

For the first time, Callaway added its high-strength forged 455-carpenter steel cup face to the X2 Hot hybrids. Last year’s X Hot fairway woods proved that adding a forged face to a fairway wood means more distance for more players, and bringing that technology to hybrids was a natural progression. Through its precision forging process, Callaway claims it was able to increase the spring-like effect of the face not just in the center of the club, but all over the face, leading to increased distance even on mishits.

The X2 Hot hybrids are available in lofts of 19, 22, 25 and 28 degrees and come stock with Aldila’s Tour Blue 65 hybrid shaft in light, regular and stiff flexes. Stock swingweight is D0. The X2 Hot Pro hybrids come in lofts of 16, 18, 20 and 23 with an aftermarket version of Aldila’s Tour Green 75 hybrid shaft in R, S and X flexes. Stock swing weight is D2. Both hybrids will be available in stores Jan. 17 and sell for $199.

During any given round I might hit my hybrid off the tee, off the deck, from the rough or possibly even around the green, making the hybrid one of the most versatile clubs in my bag. I tested the X2 Hot and X2 Hot Pro hybrids over multiple sessions both on the course during rounds and on a Flightscope launch monitor on the driving range. My goal was to simply see if the ball flight and performance matched Callaway’s claims. 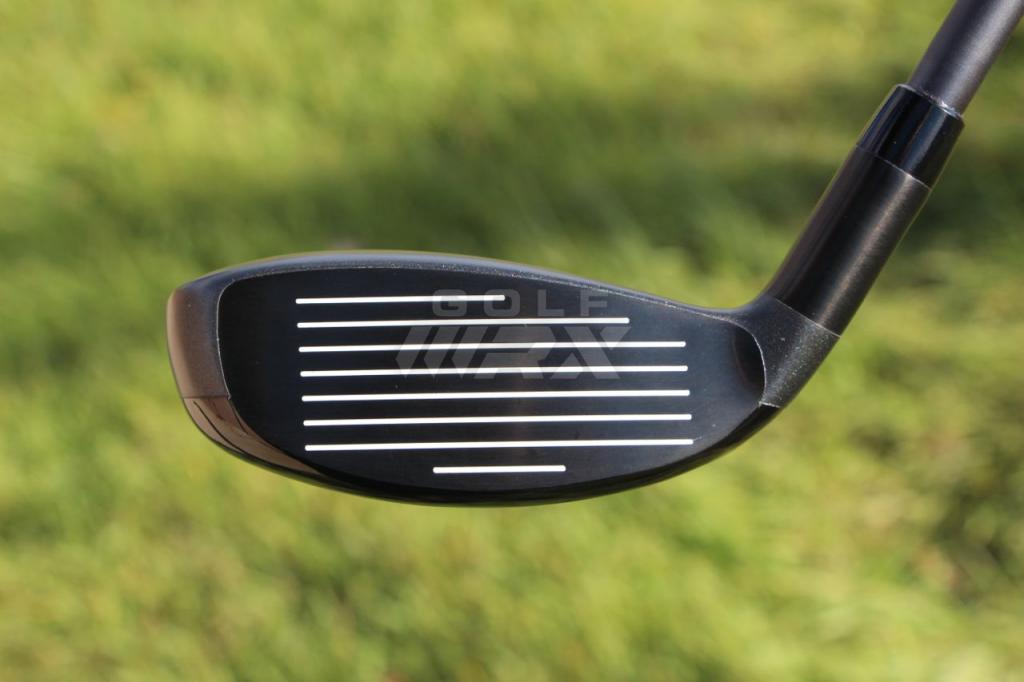 My first few shots with the X2 Hot hybrid were on the driving range prior to a round. It only took a few swings to realize this hybrid was going to play a big role in my bag. The X2 Hot hybrid was almost effortless to launch and produced a nice ball flight that wasn’t necessarily low and boring, but also wasn’t ballooning up in the air. The turf interaction on both clubs was very nice and I could play these hybrids out of the rough or fairway. My typical ball flight with a hybrid is straight to a slight cut, however with the X2 Hot hybrid, almost all my shots on the range and in testing produced a draw. I could still work the ball left to right, but it was clear these clubs have a least a little draw bias.

I really wanted the X2 Hot Pro hybrid to produce great results for me as well. I instantly liked the look of the smaller head and clean crown. At address, the Pro hybrid really looked and felt like an iron, but with a lot more power behind it. I only hit a few shots on the range before the round, but I could tell the ball flight was more penetrating, the spin was even lower than the X2 Hot hybrid and the distance was slightly longer. However, unlike the effortless launch of the standard hybrid, I was working hard on every shot. 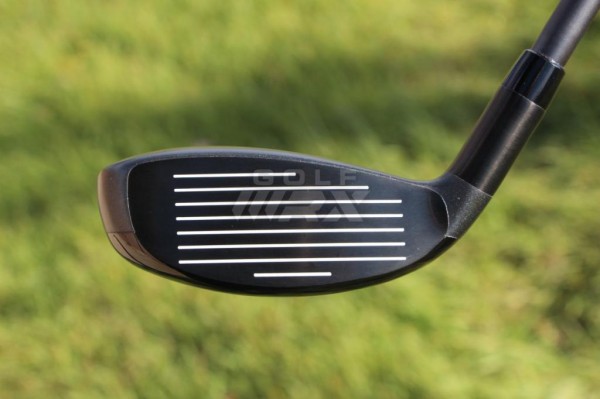 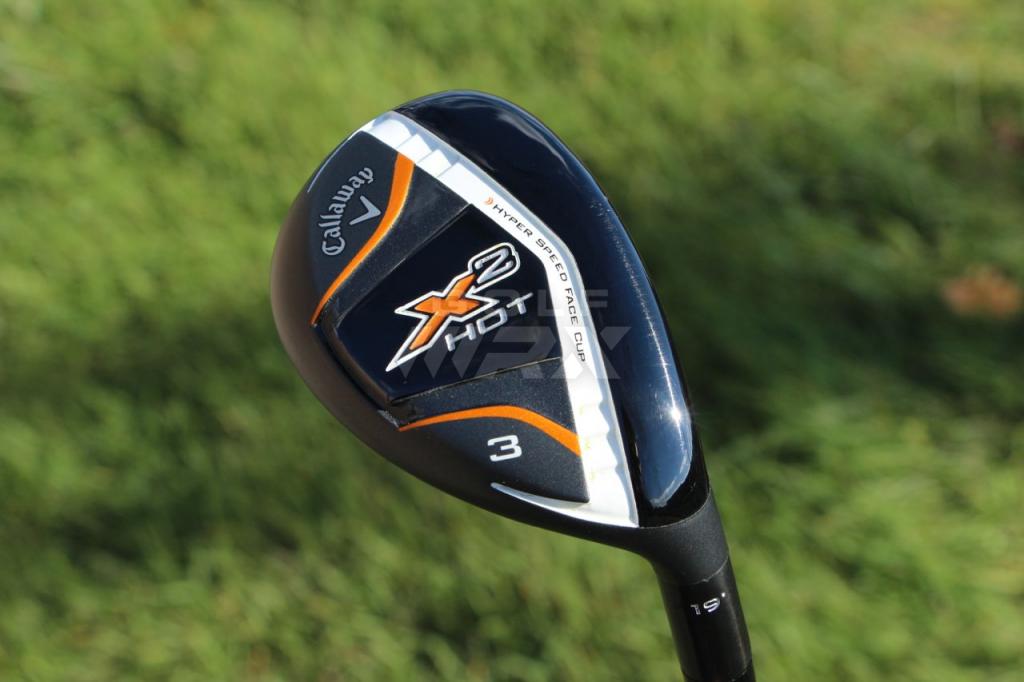 Notice how much longer front to back the X2 Hot hybrid (above) is than the X2 Hot Pro hybrid. That moves the CG more rearward in the head, raising launch and spin.

Over the course of four rounds, I played the X2 Hot and X2 Hot Pro hybrids in as many on-course situations as possible. Each club continued to produce the ball flight and distance I expected. The standard hybrid was easily more forgiving, and by the middle of the week I had gained a lot of confidence in the club. The X2 Hot Pro hybrid continued to make me work for every good shot that I hit.

Over the course of an hour-long session on Flightscope, I rotated between both hybrids and threw out true mishits and outliers from the data. The majority of my swings produced shots off or near the sweet spot, not a dime size by any means, but consistent. I also tested shots off the heel and toe as well as high and low. 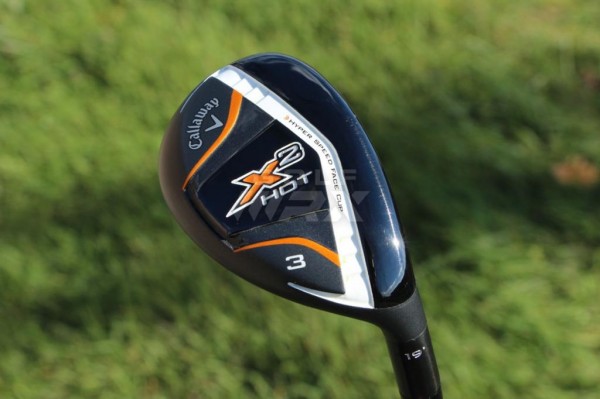 The X2 Hot hybrid is designed to launch easier but still have a nice penetrating flight with lower spin than Callaway’s previous hybrids. On average, when compared to the X2 Hot Pro, the standard hybrid generated 2 mph more ball speed, 4 more yards of carry and 1.5 yards more total distance. The launch angle was actually only a half-degree higher but generated 300 more rpm of spin and a peak height that was 2 yards higher. That said, the spin numbers were much lower than my current gamer and right inline with the range I would want out of a hybrid. 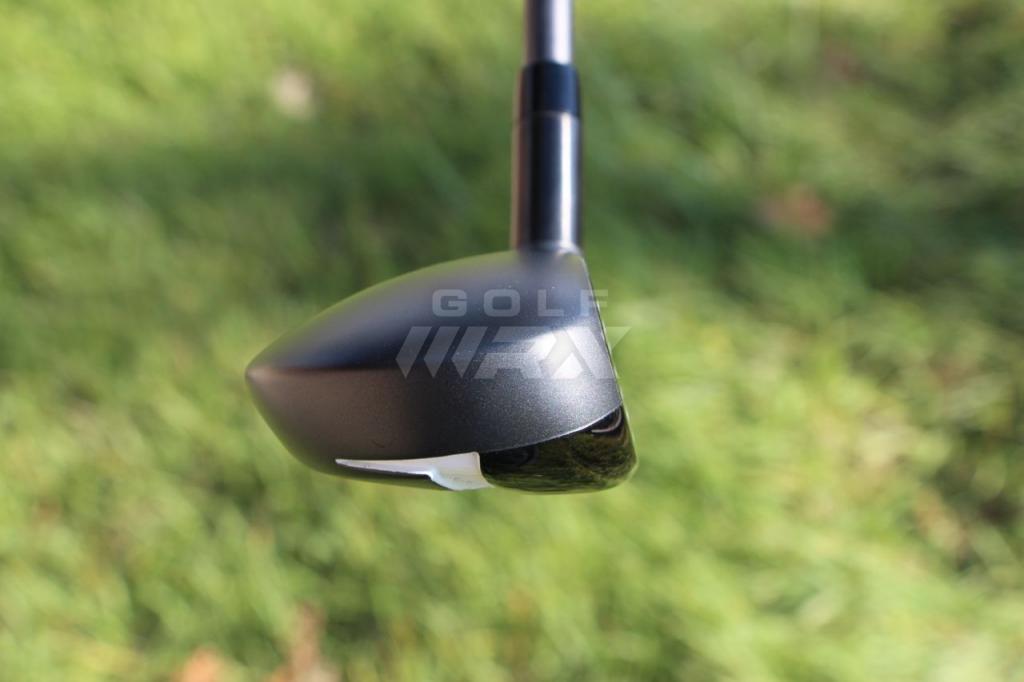 Almost every shot I hit with the X2 Hot hybrid had a draw ball flight and a very nice trajectory. What is most impressive and very important is that mishits off the heel and toe resulted in very little loss of ball speed and total distance, proving Callaway’s claim of a larger sweet spot. As expected, shots off the heel would likely minimize the draw tendency, but instead of producing a solid fade, it produced relatively straight shots or slight cuts. I really had to mishit this club to produce wildly offline shots.

Last year’s X Hot Pro hybrids, while lower spinning than previous generations, still generated more spin than some better players were looking for. Callaway took this feedback and decided to lower the CG (center of gravity) by 40 percent in an effort to decrease spin and lower ball flight. It worked. While the launch angle was only marginally lower than the X2 Hot hybrid, the overall trajectory was lower while still resulting in nice flight time and carry numbers. My spin numbers were excellent and when properly struck, the golf ball jumped off the face and flew forever. 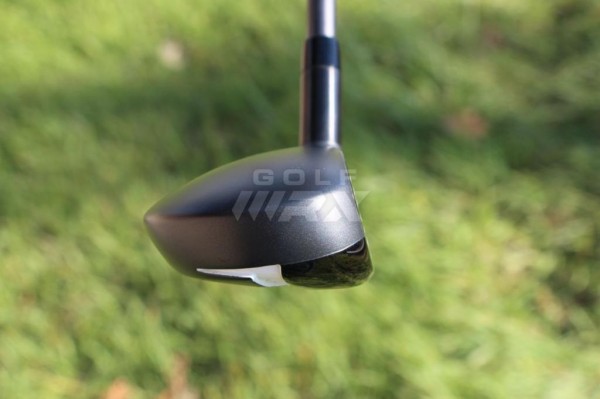 In contrast to the X2 Hot hybrid, the majority of my shots had less draw and I was more prone to hitting straight shots and cuts with the X2 Hot Pro hybrid. Mishits off the heel and toe still generated good ball speed, but it was much easier to mishit the Pro version. High shots and low shots on the face were more costly resulting in average distance loss of 4 to 5 yards.

Those were the averages. Where it gets really interesting is when I looked at the top five swings with both hybrids, based on carry and total distance, smash factor, spin and launch angle. The X2 Hot Pro hybrid outperforms the standard hybrid in every category except smash factor. I produced 4 more yards of carry and 7 more total yards, a straight to slight cut ball flight with a fractionally lower smash factor and lower launch. In fact, my three longest shots of the day were with the X2 Hot Pro hybrid and each shot was at least 4 yards longer than the longest X2 Hot shot. If I could be assured I would hit the ball almost perfectly every time, the X2 Hot Pro hybrid would be in my bag. However, it also means that the X2 Hot Pro hybrid is less forgiving, requires a lot more work to hit quality shots and truly is a club fit for the very best of players. 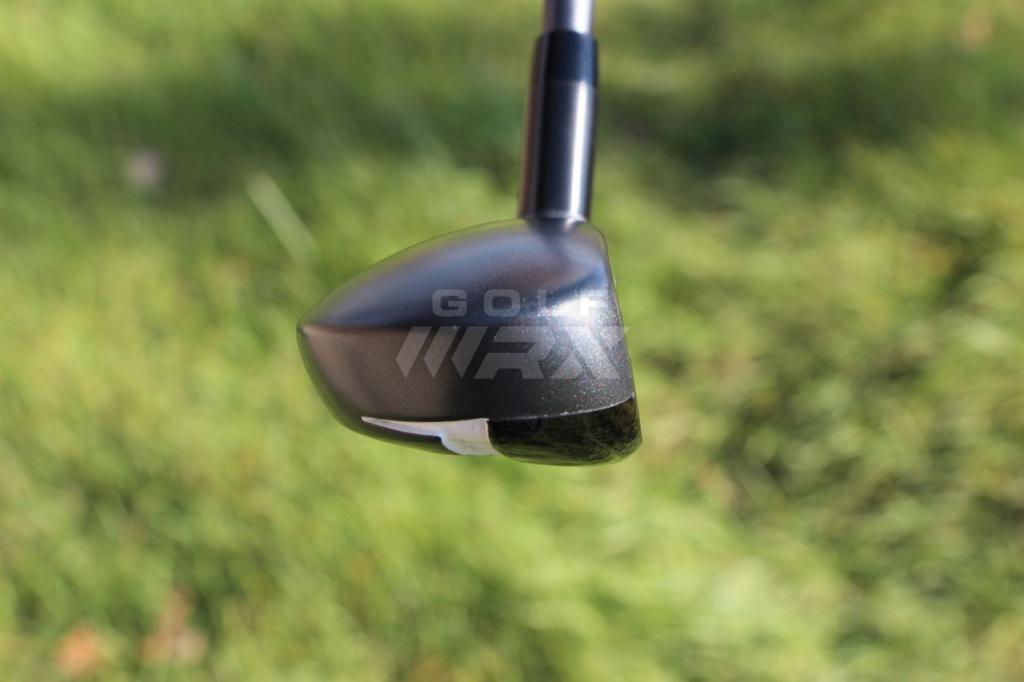 Both clubs outperform my current gamer in every category and generated average distance gains of 5 to7 yards. But more importantly, both clubs produced results I expected based on Callaway’s claims. For the better player, the Pro version should be very enticing, but even if you favor pro models, I would recommend also testing the standard version as a comparison. For the golfer looking for help getting the ball into the air and greater forgiveness on mishits, the standard version should go to the top of the list of hybrids to test.

From the moment I took the headcover off, I was instantly impressed with the look of these clubs. Both hybrids received a very noticeable redesign that went deeper than just a new paint job. With less pinching at the toe and the heel, less offset and more scroll lines on the face, the X2 Hot hybrids have a much more iron-like look than last year’s X Hot hybrids. 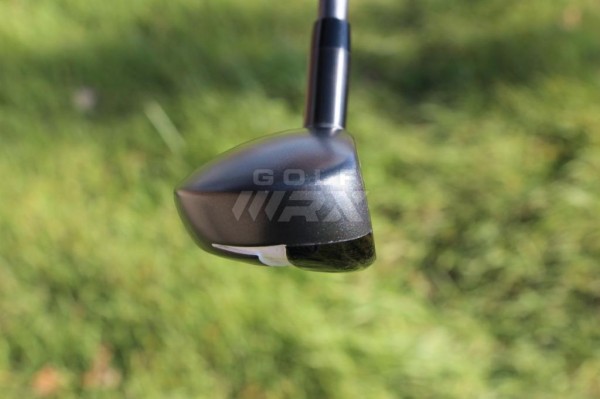 The darker grey color and darker Aldila shaft colors blend better in my opinion than the dark head and light shaft combination of last year’s X Hot hybrids. Both clubs have very clean, minimalistic crowns. The X2 Hot hybrid has a chevron alignment mark, which I like, while the Pro version is completely clean on the crown. Both clubs really look nice behind the ball at address and instill a lot of confidence prior to taking the club back.

The overall graphics package, from the clean crowns to the sweet-looking Aldila shafts, really give these clubs a nice blend of traditional and modern hybrid styling. 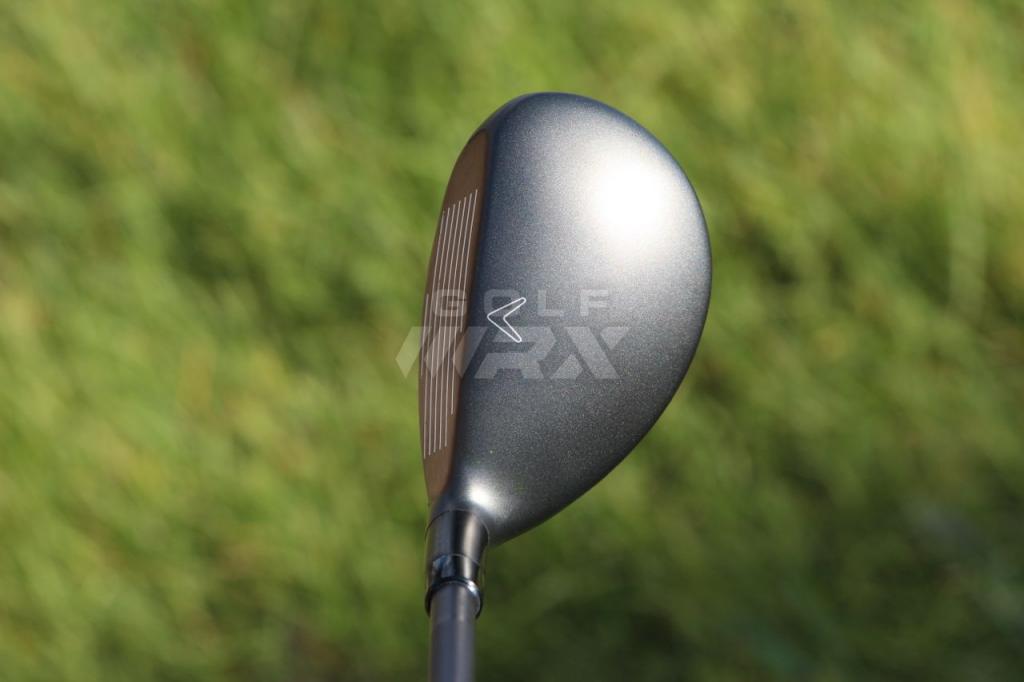 Above: The “real deal” Aldila Tour Green 75 that comes stock in the X2 Hot Pro Hybrid.

The forged face feels silky smooth at impact, especially off the sweet spot, and aided in the feeling that it was almost effortless to get the ball in the air. Plenty of feedback is also available on both heel/toe and high/low hits. I knew exactly where I made contact on each shot before even looking at the impact marks. Impact with the X2 Hot Pro, with its smaller head, felt more firm and iron-like while the X2 Hot hybrid felt slightly more springy like a fairway wood. These two clubs have distinctively different feels at impact and since feel is subjective, it is another good reason to test both clubs before making a decision. 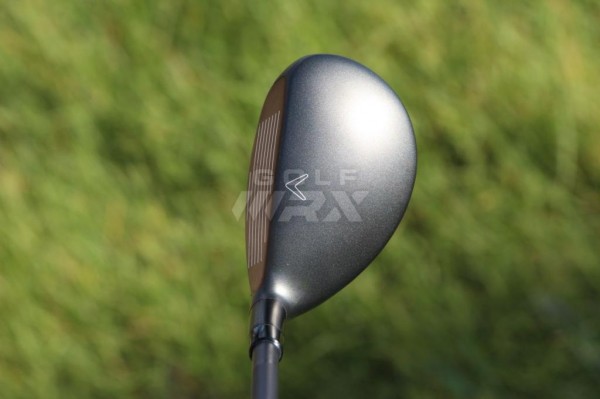 Callaway decided to rethink the look and feel of its hybrid line for this year and I think it hit a home run. The clean lines, forged face, larger sweet spot and premium shaft options all work together to create two hybrids that offer different characteristics for different types of golfers, but ultimately produce the same result: more distance on more shots.

Whether you are a high- or low-handicap golfer, both X2 Hot hybrids should be on your list of clubs to test this year. 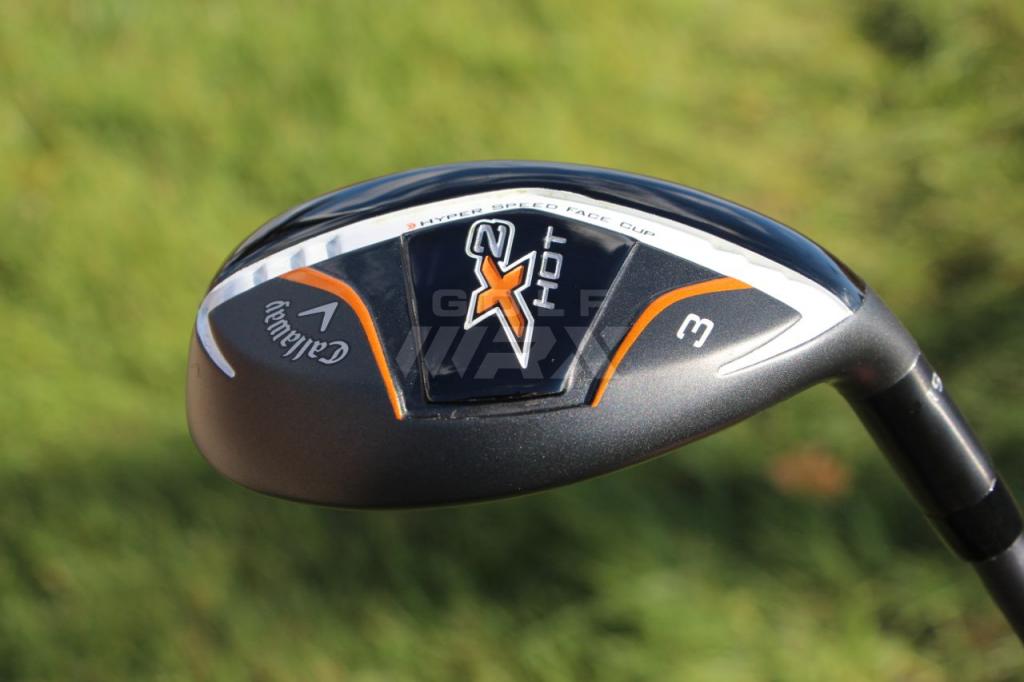