Pros: With a 270-gram total weight, the 588 Altitude is one of the lightest drivers on the market. That, and its high-MOI design can give golfers with slow-to-moderate swing speeds more distance when they pure one and when they don’t.

Cons: No adjustability. Fairly bland (some might call it tasteful) black-and-gold packaging.

Bottom Line: The Altitude is easy for average golfers to swing, and easy on misses, too. It won’t appeal to the best golfers, but it’s not supposed to.

The 588 Altitude is designed to help golfers with slow-to-moderate swing speeds swing a little faster, with an ultralight 270-gram total weight that makes it one of the lightest drivers on the market. It has a low, deep center of gravity (CG), made possible by its lack of an adjustable hosel (a weight savings of about 10 grams) and an extremely thin 6-4 titanium face and body and an even lighter BF titanium sole.

Check out Cleveland’s developed a promotional video below with two average swingers, (with one bearing a strong physical resemblance to Kenny Perry) to embolden the claim that this is not a tour stick, but a club for the rest of us. 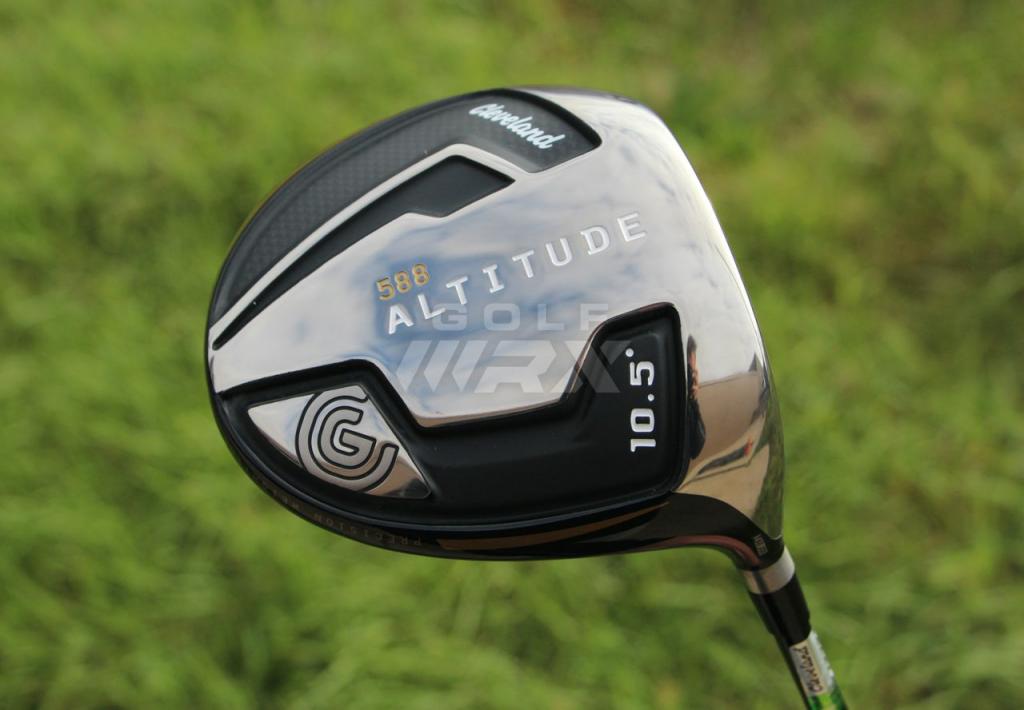 Many lightweight drivers tend feel out of wack in the feel department: the head feels too light or the shaft feels overly flimsy. But Cleveland engineers brought a nice balance to the Altitude. That had me swinging the 588 Altitude very easily, to the point that I began to swing back quicker and rip into the downswing, contact and follow through.

Some golfers possess a natural grip-and-rip mentality; for those who don’t, the confidence that the 588 Altitude encourages just might tip them toward a more authoritative lash at the ball. With other drivers, I’ve lost a sense of control when upping the velocity. The 588 Altitude preserved its stability throughout all of my accelerated swings, resulting in a high number of enviable blasts.

When I didn’t catch my drives solid, the driver still performed well. It tended to curve a little more than two other forgiving models I’ve tested, the Cobra AMP Cell and Adams Super S. But that was likely due to the driver’s low, rearward weighting. 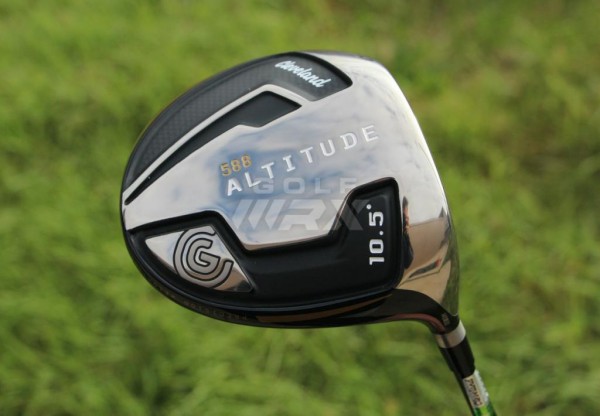 The 588’s moment of inertia (MOI), a measure of a driver’s forgiveness, is an impressive 4700. That creates more dynamic loft and face closure at impact, which was good and bad. The added dynamic loft added a bit too much spin, propelling the ball more up and sideways than I cared for. Were I to do the review again, I would have requested a 9-degree model, but you the consumer won’t have that problem. You’ll get fitted properly like you’re supposed to, right?

The added face closure was huge for me, however, as I didn’t worry that the driver would leak out to the right like a lot of other drivers that I’ve tested. That gave me confidence that I could aim down the left side of the fairway and swing hard, knowing that my trusty fade would keep me out of the left trees, and that my bigger misses wouldn’t fade off the planet. 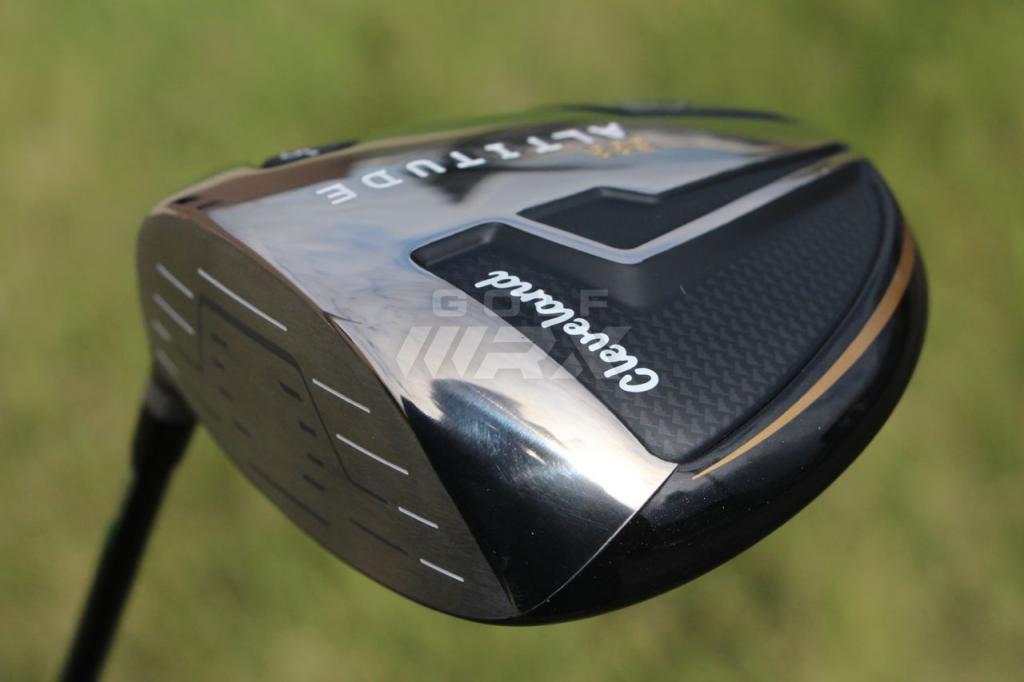 When viewed at address, the Altitude head frame the ball with a nearly-perfect half circle, a gentle, curved appearance that will be appealing to most golfers. No lumps jut out in skewed fashion, so the feng shui of the club head is preserved.

The glossy black crown has a gold containment line in the upper right portion, directing the golfer’s attention back toward the sweet spot. The word “Altitude” serves as a directional arrow, and a final line segment frames the club center. It’s an understated arrangement that goes against the grain of some current garish crown designs. That’s why I am a fan of the minimalist appearance of the Cleveland 588 Altitude crown. The lines and lettering serve a purpose, not an artistic audience in search of surreal splashes. The decoration is elegant and functional, adding to the ebony luster of the club head.

Overall, I was pleased with the club’s sound and feel. It did feel much harsher on misses that I expected, but not awful. For me, the worst-sounding driver of time immemorial was the “quack” noise that the original Nike Sasquatch made, circa 2008. With the 588 Altitude, a squarely-struck shot gives off a metallic thlock or chshwack, like an authoritative car horn when compared with one of those squeeker horns you get with a compact car. This driver’s sound is deep enough to make others look up from their business, yet so low that it doesn’t annoy in a nails-and-chalkboard manner. 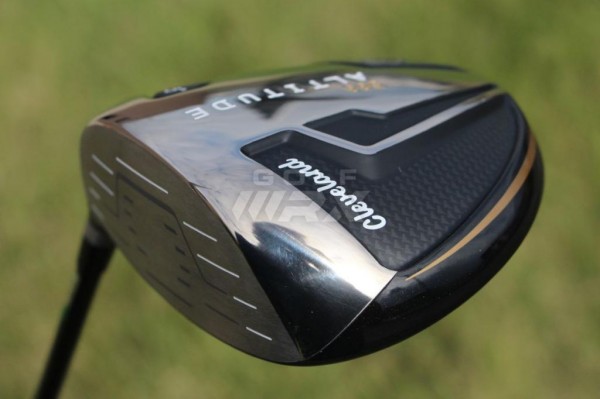 The lightweight Matrix Radix shaft is probably going to be a good fit for most interested golfers as well. It bears none of the unforgiving characteristics of the stiff telephone poles developed for the tour player. The shaft is black with gold and white print, blending well with the standard black grip and black club head.

Again, I’ve tested the Cobra AMP Cell and the Adams Super S and LS drivers for GolfWRX, and the 588 Altitude holds its own in the looks conversation. And Cleveland, better than Adams and Cobra, has properly married a shaft to its head. A knock on the AMP Cell was its overly-flexible stock shaft. In contrast, I found the Cleveland shafts to be stiffer than advertised.

I became a great fan of the Adams boxing-glove head cover this year, but I also like the more traditional sock-sleeve that Cleveland provides. A nuance to the latter is the leather strap that stretches across the top, allowing you to pull it off with ease.

Contrary to most golfers’ feeling that more adjustability has to be better, I’m a fan of the fixed hosel design of the club. The typical amateur doesn’t need to think about this lie or that face angle any more than necessary. Your club fitter (yes, you need one) ought to be competent enough to determine what head, loft and shaft will work best for you 95 percent of the time.

If you’re struggling to hit your tee shots high and far enough, the well-named 588 Altitude makes a lot of sense. But if you’re considering this driver, be certain to demo all three lofts, because its lightweight design and low, rearward CG might make its 9-degree model fly a lot different than your 9-degree model.

Again, I would have liked to have tried the 9-degree model, as I have a tendency to hit a high ball. Despite my persuasion, I have no doubts that Cleveland covered all the lofts necessary for this model. I also applaud Cleveland’s decision to make a 12-degree head, which will be of great benefit to those whose swing speed is on the lower end of average, ensuring that tee balls carry farther than they roll.

Click here to see what GolfWRX members are saying about the 588 Altitude driver in the forums. 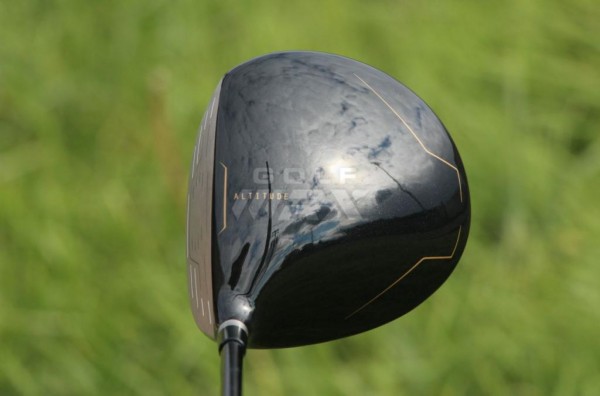